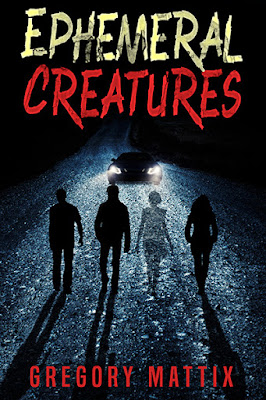 I'm pleased to announce that my new supernatural thriller/horror novel Ephemeral Creatures is now on sale at the Amazon Kindle store, and you can read it for FREE with Kindle Unlimited!

When Kevin gets behind the wheel drunk after a night out with friends, that leads to tragic consequences. The ensuing car crash kills his best friend and seriously maims another. After spending ten years in prison for his crime, he believes he’s finally come to terms with the tragedy and is ready to try to put his life back together.

That all changes when he starts seeing the specter of the young woman he’d killed. And as she begins to reveal her secrets, one shocking revelation rocks Kevin’s world. Hoping to find both answers and some measure of redemption, he embarks on a perilous road, one that puts him on a collision course with a madman who possesses a terrifying supernatural power. Kevin will have to enlist the help of his old friends, even if they want nothing to do with him, in order to try to right the wrongs of the past and survive the danger that awaits.

Ephemeral Creatures is both supernatural thriller and poignant meditation on the power of love and loss.


The dead girl first appeared in the mess hall at breakfast time.

Kevin Bradley nodded in thanks to the kitchen worker that dished up his plateful of runny scrambled eggs, burnt hash browns, and two rubbery sausage links. When he set his plate on his tray and turned to go find a seat, she was suddenly standing there, close enough to reach out and touch.

The specter stared at him, her form translucent and grainy, like an image from an old, degraded VHS tape that had cycled through Blockbuster too many times. She didn’t glow like ghosts in the movies tended to, though. The dead girl was about twenty, short and slim, her head not quite reaching Kevin’s shoulder. Large tawny eyes regarded him from an oval face, and her mop of curly hair, a deep-red dye job with dark roots exposed, was sculpted high atop her head in a style popular in the eighties. The rest of her outfit was pure eighties punk: a glittery shirt hanging off one shoulder and revealing a black bra strap, along with a short black-and-red tartan skirt over holey fishnet stockings. One gold bangle earring dangled from an earlobe, but the other was missing, evidently torn out, judging by her bloody, shredded earlobe.

Kevin barely processed the girl’s outfit, his gaze drawn with a terrible magnetism to her gory head wound. Blood dripped into one eye, and her head was cocked slightly sideways, one temple deformed and spongy, spatters of blood and brains dotting her cheek and neck.

After that initial moment of shock passed and comprehension dawned, Kevin cried out in alarm. His breakfast tray slipped forgotten from nerveless hands and banged on the floor, plastic plate clattering and silverware bouncing across the concrete. A chunk of scrambled egg clung to one leg of his orange Department of Corrections jumpsuit, but he hardly noticed.

The clamor caused him to glance down reflexively for an instant. When he looked back up, the apparition had disappeared as if it had never been. He stood there in the sudden glaring silence with his mouth hanging open, the heavy weight of every staring eye in the crowded mess hall resting squarely on him.

“Guess you ain’t hungry, huh, Bradley?” Tubby finally said with a guffaw, the guard’s loud voice breaking the silence. “That’s all you fuckin’ get, chief. Better get down and lick it up if you wanna eat.” His real name was Jones according to the patch on his uniform, but the inmates all called him Tubby because of his girth.

Chortles erupted, and Kevin was pelted with a number of insults, both good-natured and not. The normal buzz of conversation and scraping of silverware on plates resumed as the other men got on with the important business of shoveling down their breakfast.

“What the fuck, yo?” Kevin’s cellmate, Tito, rested a hand on his shoulder, shaking him and rousing him from his daze. “Look like you seen a ghost, man.”

Kevin swallowed hard but could find no words.

“That shit ain’t gonna clean itself up,” Tubby growled, pointing sharply with his baton, his amusement obviously gone the way of Kevin’s apparition.

Kevin sighed as he knelt to scoop the mess back onto the tray with trembling hands. Whether or not Tito was right about him seeing a ghost, he didn’t know. A more likely explanation would have been a hallucination.

Whatever the cause, the worst part was that he’d recognized the girl. He was the one who’d killed her.